Orvieto & Civita di Bagnoregio
8 hours with a private driver from Civitavecchia port
OVERVIEW
DESCRIPTION
PRICE
INFO
TERMS & CONDITIONS
OVERVIEW
Highlights Duration Departure/Return point
DESCRIPTION
Itinerary
Your private driver will pick you up directly at Civitavecchia port and drive you to the striking Civita di Bagnoregio, which has only 14 residents, making it the least populated town in Italy!
Once abandoned due to frequent earthquakes, Civita has been resurrected thanks to a number of artists who discovered the town and restored it.
Perched atop a steep hill, the town is an extraordinary place, accessible only through a pedestrian bridge built in 1965. There are no cars in Civita, where time has stood still for the past several hundred years.
Next, continue through the magnificent Umbrian countryside and arrive in Orvieto, renowned for its wine and olive oil.
The medieval town sits majestically on the cliffs. Visit and explore the town, checking out the stunning cathedral, considered one of the most important in Europe, and walking down the many narrow cobblestoned lanes.
You may have a wine cellar tour in a family run winery, and a visit of its underground tunnels and passageways, which have been built more than 2500 years ago by the Etruscans. This is a unique experience!
At the end of the day, you are brought back to the pier in Civitavecchia.
PRICE
PRICES PER PARTY
(not per person)
All prices are in Euro currency
​​Party of 1-3 people : 850,00

​Party of > 8 people : Contact us
Rates include Rates do not include
Currency Calculator
INFO
Orvieto: is a town of the region Umbria, situated on the flat summit of a large butte of volcanic tuff.
The site of the city is among the most dramatic in Europe. Orvieto was built originally in the Etruscan era, and it kept growing throughout the ages. It now has the looks of a medieval small town, with more than 3000 years of history. Among the important sites to visit in Orvieto is the Duomo, one of the most magnificent you’ll ever see

Civita di Bagnoregio: is a very small town located atop a plateau of friable volcanic tuff. It was founded during the Etruscan era, and during the centuries it never grew much in width, always remaining incredibly small. Nowadays the town has a very limited number of inhabitants, and it was known as a dying town before tourism started to head in its direction during the last few years.

In every earthquake, exposed tufa stone and parts of  the city tumbled into the valleys. You can see the evidence today, in narrow streets that end abruptly at the edge of the cliff and in walls still standing.
The population today varies from about 14 people in winter to over 100 in the summer.
Life is simple in Civita di Bagnoregio and the locals continue spending their days doing what they did decades ago; going to the local butcher, buying fresh bread and sitting outside talking to their friends and neighbors.
To get to this tiny hilltop settlement above the Tiber River, you walk  for about a quarter of a mile on a concrete footbridge that crosses an abyss. This is the only way to get to Civita, with no cars-streets. 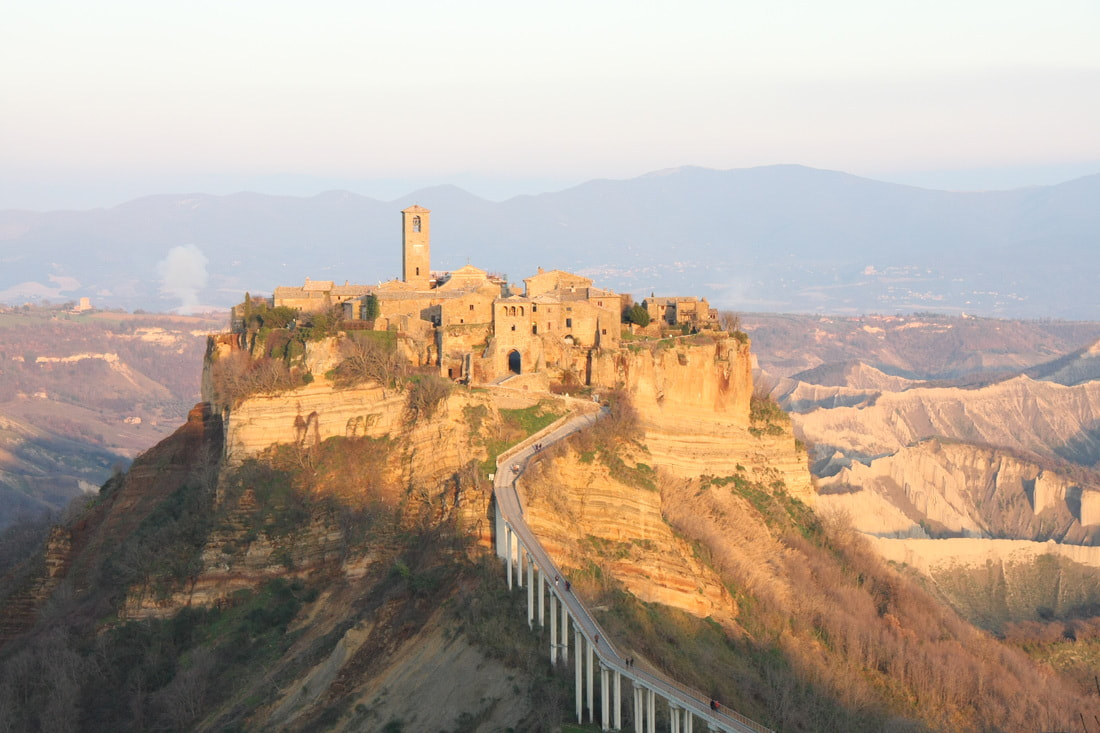 They call it “the dying city” because, gradually, over many centuries, erosion and earthquakes have tugged away at the tufa rock until only this small part remains. Everywhere you turn, the views across the collapsed hillsides and wide barren landscape, as far as the Umbrian mountains, are breathtaking.
TERMS & CONDITIONS
BookingCancellation policy
This itinerary is operated exclusively for you and your party and can be customized as you wish.
Please contact us for details and for booking this tour
Other tours from Civitavecchia-Rome Port
back to Civitavecchia-Rome port